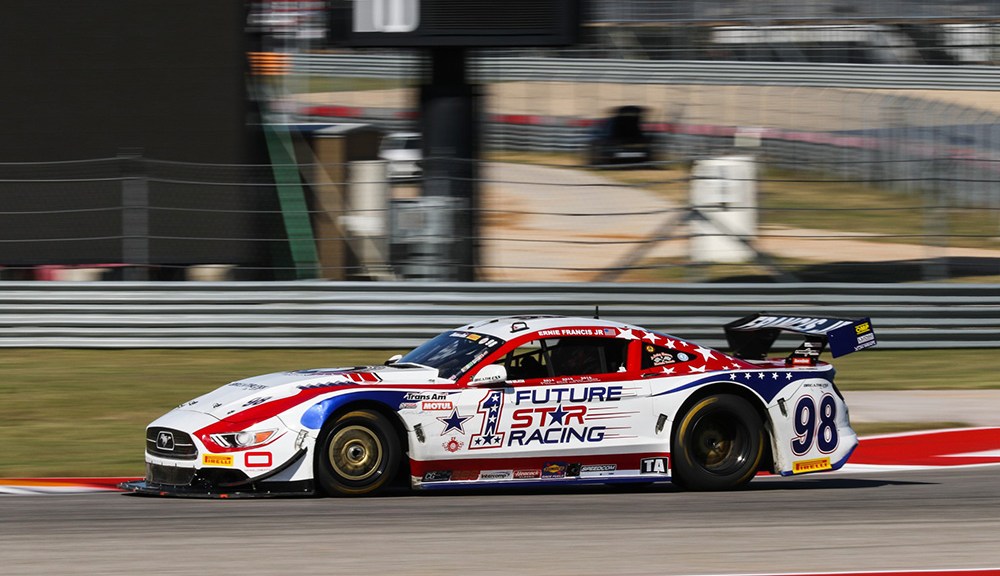 Ernie Francis Jr. put an exclamation mark on the Trans Am Series season presented by Pirelli by winning the Motul Pole Award for the end of season Heacock Classic at the Circuit of the Americas on Saturday.

Francis shared the limelight with Rafa Matos, the newly crowned champion winning TA2 pole with a record participation of 52 competitors. Due to time constraints, the TA / XGT / SGT / GT sessions were combined and reduced to 12 minutes, with the TA2 class being split into two groups with 10 minutes each for qualifying.

Eliminated from the championship for the first time in his Trans Am career, seven-time champion Francis only completed two laps – both under the track record – topped by a 2m05.871s driver in the # 98 Future Ford Mustang Star Racing. It was the 23-year-old’s fifth pole of the season, the 52nd of his career and the 23rd in the TA class.

“It’s always great to have a track record,” said Francis. “The car had a good pace all weekend. We got it out of the trailer and we were already super fast. We are super happy with this. We put new Pirelli tires on it and the car was almost a second faster than second place. We couldn’t finish the championship this year, but if we can end the season with a win, we will be very happy.

Third-generation driver Matt Brabham qualified second on his Trans Am debut, clocking 2m06.771 in the # 20 Ford Mustang ALTWELL CBD. He replaces Chris Dyson as the recently crowned 2021 TA Champion forced to miss the event due to a family affair.

“I am very grateful for the opportunity to race in Trans Am, but obviously I hope all the best for Chris and his family,” said Brabham. “Everyone in the CD Racing team has been wonderful and welcoming. It was quite fun learning the car, but I was a bit disappointed with myself during qualifying. I didn’t play traffic well and would have liked to have had an open turn to show what the car and I can do. The second place is always super good, especially the first time. The car and the team did a great job.

Pro-Am points leader Oscar Teran was fourth in 2m08.743 in the No.3 Ford Mustang Oscar Teran, followed by Ken Thwaits, in 2m09.283 in the No.5 Chevrolet Camaro Franklin Road Apparel.

In TA2, Matos quickly got to work, breaking the track record of two seconds on his first lap in the # 88 3-Dimensional Services Ford Mustang. Entering the event with the title already in hand, Matos improved twice to win his fourth pole of the season and the 15th of his career with a lap of 2m10.539s.

“It’s always nice to start from pole position,” said Matos. “It gives us the freedom to pace ourselves for the first part of the race. But, there are a lot of hungry guys out there. Misha (Goikhberg) is looking for her first victory. There’s (Connor) Mosack, who’s in good shape today. I expect to have a very exciting race tomorrow. Dealing with over 50 cars is going to be very difficult. “

Misha Goikhberg will start second in the category, clocking 2m10.736s in the Camaro No 20 BC Race Cars. Mosack, currently third in points, will start third, 2m10.962s, followed by former TA2 champion Cameron Lawrence, making his season debut in the # 6 Camaro Franklin Road Apparel, and Adam Andretti in the # 86 3 -Dimensional Services Mustang.

Thomas Merrill clocked the fastest lap in Saturday’s solo practice, clocking 2m11.376s in Mike Cope Race Cars # 26 Ford Mustang before suffering an engine failure near the end of the session. As it looked like his weekend was over, TA2 veteran Tom Sheehan graciously stepped in and loaned Merrill his spare car, keeping his quest to finish third in the championship alive. Merrill led the second qualifying group, eighth overall in 2m12.864s in the # 91 Ford Mustang HPTuners.

Erich Joiner claimed his seventh consecutive pole in XGT, clocking 2m10.096s in the # 10 Porsche 991 GT3 R of Good Boy Bob Coffee Roasters. It was the 10th Trans Am pole of his career.

In SGT, Justin Oakes took his sixth pole of the season and his eighth of his career driving the # 11 Corvette Droneworks, with a record lap of 2m12.226s.

“It all really came together today,” Oakes said. “We adjusted the car a lot when we were at Indy (for the SCCA National Runoffs) and we really tuned the car. We’ve improved and learned so much since we were here at COTA last year, and that is the biggest difference in our earnings, I think we can go even faster tomorrow with a few minor tweaks to the car.

Second in the category – and ahead of the four SGT West competitors – was Cindi Lux, 2m17.973 in the Dodge Viper No. 45 Lux Performance / Black Rock Coffee.

Sean Young made his Trans Am debut by taking pole in the GT class. He raced 2m24.204s in the # 74 Corsair Racing Aston Martin Vantage.